One of the first posts I ever made here was related to a sideboard that I was building. That was a little over a year ago. It’s still not done… It’s not complete for 2 reasons. First I have been busy with other projects and paying customers. Second, there are just a number of extremely frustrating components to this build. Many, many months ago I worked to stiffen up the cabinet. It was a minor fix, but frustrating to have to do. I’ve also spent countless hours perfecting the fit of the drawers. I’ve finally dialed all of that in and now the only thing left is the doors. The doors haven’t been easy. Slightly out of square openings (related to the earlier need to stiffen up the cabinet) led to a very difficult fit for the door. The challenge with doors is to get the proper gap all of the way around the door (this is even harder when the opening isn’t perfectly square).

After lots of hand planing and sanding, I had an even gap around the door. Unfortunately the gap was too large. Originally I considered rebuilding the door, but ultimately I decided to work with what I had (this piece is more of a prototype and learning experience than something I’m selling to a customer). To build up the width and height of the door, I have glued thin strips of walnut to the outside of the perimeter of the doors. To create the strips I took thin pieces of resawn walnut and passed them through my wide belt drum sander until each strip was less than 1/8″ thick.

The final pieces were glued on today. The picture below shows the final step in the glue up. The challenge with the doors, is that I like to cut the sides at a 5 degree angle (it helps in opening and closing the door). Cutting the angle isn’t hard, but clamping it up and keeping the glued on strip from slipping while maintaining enough clamping pressure and keeping the center panel from buckling was not easy. I’ll be curious to see how this dries up. Hopefully it comes out well; otherwise I will be building 2 new doors on the next trip to the shop. 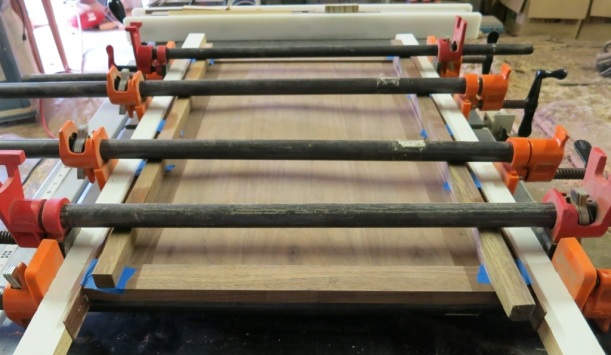 Finally back to the shop for some weekend work. Between business travel and the start of college football and NFL, the time has been somewhat limited. It does look like UVA is trying to convince me that staying home to watch games on Saturdays is a waste of my time.

In the picture below I’m starting the clamping for the gate leg table. It looks simple, but is actually a little more challenging than anticipated. The clamped piece in the photo only extends about half the length of the apron. As a result I need enough force to keep the tenon fully seated in the mortise in the leg, but there can’t be so much pressure that the piece wants to bow. For the piece to look nice and function well, it is important that this half of an apron is tightly joined to the full apron that was previously clamped up. For now everything looks good, but we’ll see how we’ll it dried the next time I get to the shop. This was the last assembly step for the gate leg table, so the next trip should include sanding and a first coat of finish.